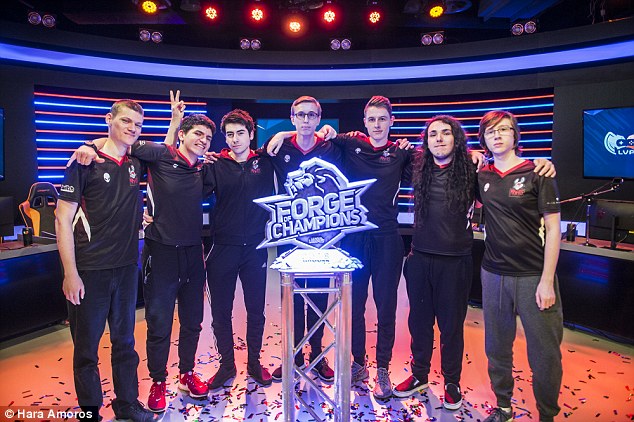 By Jack Stewart For Mailonline

Misfits Academy are the first ever team to get their hands on the Forge of Champions trophy after a well earned victory against Diablous in LVP’s Barcelona studios.

While Misfits’ main team traveled to Madrid for their EU LCS third-place playoff against Vitality, their Academy team were on the opposite side of Spain as they were winning the biggest share of the £50,000 prize pool.

Forge of Champions is the first ever UK League of Legends tournament that Riot themselves have hosted. Spanish-based tournament organisers LVP helped run the tournament after ESL had previously held competitions for the UK scene.

Misfits were heavy favorites heading into the final after they dominated exceL Esports in the semi-finals. They showed exactly why they were so feared early into the series as they comfortably won the first two games; winning the second in a 24 minute stomp.

Yet Diabolous were tenacious and displayed exactly why they also deserved to be in the final. They fought back valiantly, forcing a game five with the momentum in their favour. They held a 4-0 kill lead 20 minutes into the deciding game but Misfits were playing the map well and held a gold lead despite their gold deficit.

Misifts appeared to have thrown away the game when Special, who is the sub mid-laner for Misfits’ main team’ thought he had caught out by Bolulu only for his team to get caught out by a three-man Shockwave – giving Diabolous multiple kills and the Baron.

However, Misfits defended resiliently and after finding a pick on enemy jungler Nji, they took full advantage securing both Elder Drake and Baron. That put the game back into Misfits’ hands and they weren’t going to throw away their lead a second time.

Their momentous victory has secured Misfits Academy a place at the European Masters later this month as they will take on the best regional teams from around Europe in hopes of taking the biggest share of the €150k (£134k) prize pool.