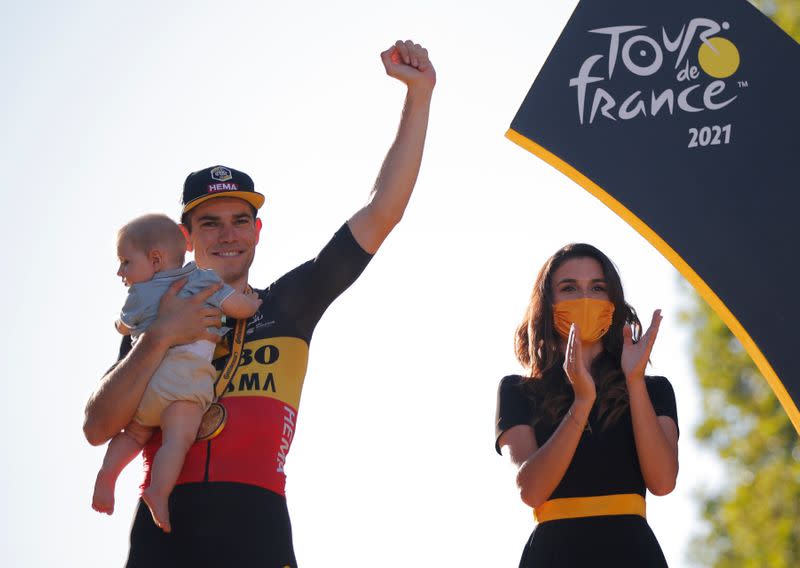 (Reuters) – Belgian Wout van Aert arrived at the Olympic Games on Monday one day after winning the last two stages of the Tour de France and said he didn’t have much left in his legs after the grueling three-week tour.

The 26-year-old will chase gold in both the men’s road race and the individual time trial, but his first priority was recovery, he told Belgian TV reporters upon arrival.

“There isn’t much left in my legs at the moment. It’s been a long journey, but I’m glad I was heard. Luckily I was able to sleep (on the plane),” he said.

Van Aert was the winner on Sunday on the Champs Elysees after sending a strong message about his ability for Olympic time trial gold when he won Saturday’s 20th stage, a 30.8km individual time trial from Libourne to Saint-Emillion.

Then on Sunday he was again first at the finish in the mass sprint after a final stage of 108.4 km.

Thereafter a ride to Paris Charles de Gaulle Airport to fly to Japan, along with teammate Greg Van Avermaet, who was the Rio de Janeiro road race gold medal five years ago.

“The flight was better than expected, we weren’t even stuck at customs for long. We expected it to be worse,” said 36-year-old Van Avermaet.

“We made the right decision to fly to Tokyo right after the Tour rather than spend a night in Paris. I hope to recover a little and strengthen over the next five days. Overcoming jet lag will be the hardest part and we have to adapt too. at temperatures, “he added.

The men’s road race on Saturday and the individual time trial next Wednesday.