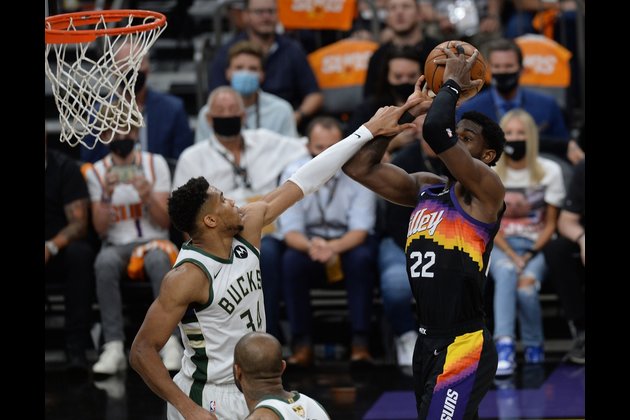 Chris Paul scored 32 points and delivered nine assists while Devin Booker contributed 27 points as the Phoenix Suns leaned on their trusty guard’s game on Tuesday to earn a 118-105 win over the visiting Milwaukee Bucks in Game 1 of the NBA finals.

Deandre Ayton scored 22 points and 19 rebounds for the Suns, who have been playing their first NBA Finals since 1993. Phoenix has never won an NBA title.

The Bucks narrowed down to 101-94 on Antetokounmpo’s basket with 7:16 left before Booker and Paul scored two consecutive baskets for the Suns. Milwaukee never got close to nine the rest of the way.

Inspired by Antetokounmpo’s return, the Bucks took the lead 20-18 with 3:37 left in the first quarter. A triple from Cameron Johnson seven seconds later gave the Suns a 21-20 lead, which they never lost again, leading 30-26 at the end of the quarter and 57-49 at half-time.

Mikal Bridges ended the night with 14 points while Johnson and Cameron Payne each had 10 points for the Suns. Phoenix titular forward Jae Crowder, the only player from both teams with NBA Finals experience, scored one point and was 0 for 8 from the field.

Jrue Holiday collected 10 points, nine assists and seven rebounds for the Bucks, who were only 9 of 16 on foul shots. Antetokounmpo was 7 out of 12 from the line.

The Suns won despite losing reserve long Dario Saric to a knee injury in the first quarter. Saric entered the evening with an average of 4.8 points and 2.6 rebounds in 13 playoff games this year.