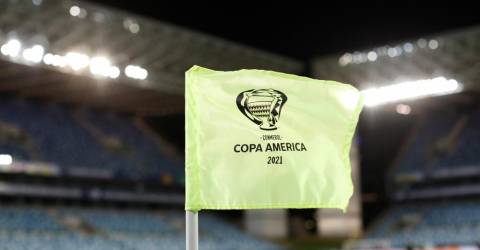 RIO DE JANEIRO: The contrast between the rejuvenated European Championship and a pandemic-hit Copa America are great but for South American players, at least, perhaps the biggest discrepancy is the inferior state of the pitches in Brazil.

Lionel Messi and Brazil’s Neymar are among the players and coaches who have lamented having to play on surfaces that the Argentine forward euphemistically described as “not very helpful”.

“I am not going to call it horrible but it’s terrible for playing football on, it ruins the spectacle,” Brazil coach Tite said of the pitch at the Nilton Santos stadium in Rio de Janeiro, the same one that irritated Messi a few days before .

“Those that want to create aren’t able. It’s unacceptable that two top quality teams… have to play on a pitch in these conditions.”

The Copa America in a Brazil, where the Covid-19 pandemic is still rife, has been overshadowed by the Euros which are taking place across Europe under vastly different circumstances.

Most obviously, Euro 2020 has featured ecstatic crowds, while the Copa is being played behind closed doors. But the Copa has also had more fouls and fewer goals per game.

That is partly down to poor pitches, Arnaldo Cezar Coelho, the Brazilian referee at the 1982 World Cup final, told Reuters.

“The quality of the pitch is poor, the grass is higher, there are more holes,” he said. “That makes the ball more alive and that leads to more body contact and fouls.”

After Brazil played Colombia at the Nilton Santos, Tite described the ball as being “highly strung.”

The game does not flow as quickly as it should because players need two or three touches, he said.

“If we want to put on a great show then we have to give the players the tools,” he added.

Part of the problem is the lack of preparation time.

The 2021 Copa America was transferred to Brazil with less than two weeks notice, after Colombia was withdrawn because of a wave of social protest there and co-hosts Argentina pulled out due to a surge in Covid-19 cases.

Brazil’s far-right president agreed to host the tournament in spite of the pandemic, which has so far seen 500,000 people die.

The last-minute decision meant Brazil had to find grounds, training pitches, hotels and flights for the 10 competing teams and they settled on stadiums in Brasilia, Cuiaba, Goiania, and Rio de Janeiro.

A fifth stadium also in Rio – the legendary Maracana, site of the 2014 World Cup final – will be used for the final on July 10 and officials, perhaps taking the criticism on board, last week re-laid almost 50% of the turf.

The South American soccer governing body CONMEBOL’s agronomist said the grass there was worn and a new surface was needed for the final.

The organization has not remarked on the state of the Nilton Santos pitch but Neymar made ironic comments on Instagram.

Brazil will play Ecuador there in the quarterfinals on Friday and Neymar posted a picture of a dirt pitch and asked if Brazil’s next game would be played there.

“When you’re 10 minutes in you can’t play any more,” he said after his side’s 1-1 draw with Chile. “It’s more apt for sports other than for football. The same thing happens in the other Copa stadiums.” – Reuters