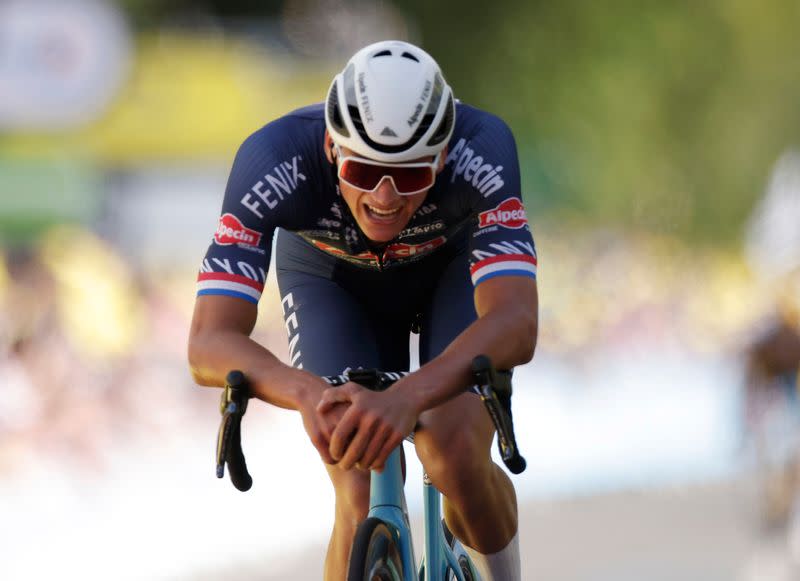 The Dutchman produced a brutal acceleration with 700 meters to go on the final climb to Mur de Bretagne to beat defending champion Tadej Pogacar and his Slovenian teammate Primoz Roglic, who were second and third respectively, six seconds behind.

The 26-year-old, making his Tour debut, burst into tears when it was confirmed that he had moved to the top of the overall standings.

“It’s a shame that he (Poulidor) can’t be here, but there’s nothing I can do about it,” said Van der Poel of his grandfather, France’s most popular cyclist, who died in November 2019 at the age of 83 years.

“It would have been great to have a picture of him and me in the yellow jersey.”

Having also collected eight bonus seconds in the first of two climbs to Mur de Bretagne, Van der Poel took the yellow jersey as leader of the general classification from Frenchman Julian Alaphilippe and now leads the world champion by eight seconds.

Poulidor never wore the coveted jersey in 14 Tour races between 1962-76, but he won seven stages and made it to the podium eight times.

Van der Poel had his eye on the jersey as the profile of the first two stages suited his qualities, but he was powerless against Alaphilippe in the first stage on Saturday, finishing eight seconds off the pace.

He made up for lost time on Sunday by making up for bonus seconds on the first ascent to Mur de Bretagne (2km at 6.9%) and completed his mission on the second ascent.

“It’s pretty incredible. The first time on Mur de Bretagne I attacked to get the bonus because I knew it was the way to get the yellow jersey and today was my last chance to get it,” said Van der Poel, who is not competing. overall victory.

“Then I realized that I also had to win the stage with a small gap”.

“I’m pretty speechless actually that it worked. You can dream of a scenario like this, but it’s amazing to come true.”

Among the title contenders, Pogacar and Roglic, first and second last year in Paris, proved to have good legs by beating the rest of the group and accumulating bonus seconds after already being solid in the opening phase on Saturday.

Overall, Pogacar is third, 13 seconds behind Van der Poel, with Roglic fourth one second behind.

Geraint Thomas, the 2018 champion, succumbed in the final meters and lost 17 seconds to the Slovenian duo, slipping to 20th place overall, 41 seconds off the pace.