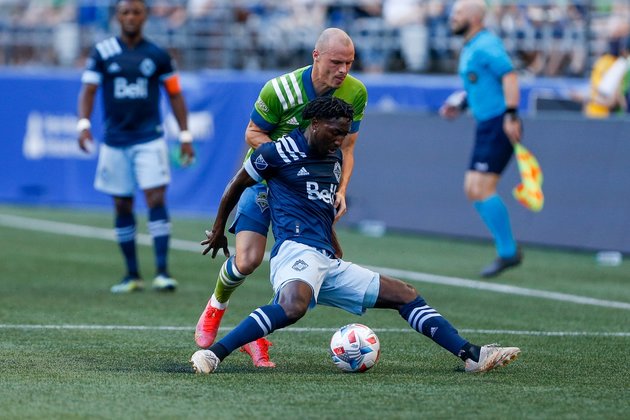 Raul Ruidiaz scored his ninth goal of the season at the top of the table as the Seattle Sounders reunited for a 2-2 draw with the Vancouver Whitecaps visiting Saturday night.

Jimmy Medranda also scored for the Sounders (7-0-4, 25 points), who remain the only undefeated team in the league.

Medranda equalized in the 71st minute from a corner kick. Joao Paulo’s kick was deflected by Fredy Montero and back to the top of the penalty area, with Medranda running over the ball and firing an 18-yard left-footed shot under Vancouver diving goalkeeper Maxime Crepeau.

Ruidiaz gave Seattle a 1-0 lead at half-time on a goal in the 40th minute, catching a Brad Smith cross on the left wing and scoring with a left-footed shot from about 10 yards. The game started when

Sounders midfielder Josh Atencio stole the ball in his own half, with Cristian Roldan and Will Bruin helping to move the ball forward to the top of the 18-yard area.

The Sounders had not conceded a goal during the game run throughout the season until Vancouver scored twice in a seven-minute span early in the second half to take the 2-1 lead.

Dajome got the first in the 49th minute, catching a long ball from Caio Alexandre and lifting the ball over Seattle goalkeeper Stefan Cleveland just outside the top of the 18-yard area before regaining possession and putting the ball into an empty net. .

The Whitecaps’ second goal, 56 minutes, also came from a Seattle defensive error. Dajome’s cross for Cavallini bounced just above defender Shane O’Neill’s head. Cavallini didn’t completely head off from the top of the 6-yard area, but the ball slipped off his leg and rolled just inside the right post.

The Whitecaps nearly scored a goal just before half-time when Deiber Caicedo stole the ball from Alex Roldan just outside the top left of the 18-yard box, but Cleveland made a left-footed shot.