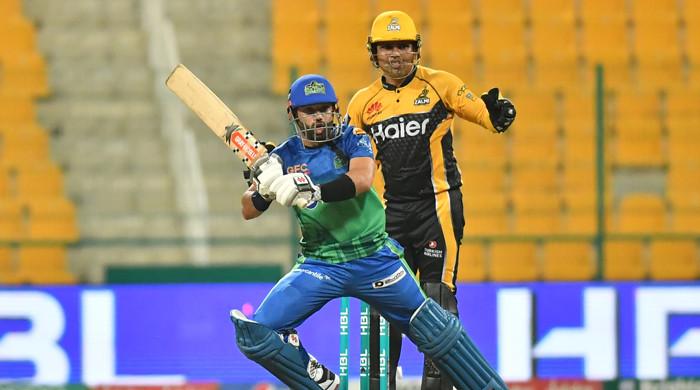 Irfan took Masood’s wicket in the fourth over to put Sultans at 45/1.

Even though Masood was fired, Rizwan didn’t let this affect his serve and continued to play his game. And on the 10th anniversary he reached his half-century to lead his team from the front in the pursuit of the race.

The Rizwan and Maqsood duo formed a 116-point partnership before Maqsood was caught by Umaid Asif when he tried to finish the match with a 6.

However, Rizwan then scored a six on the next ball to give his team an eight wicket win over Zalmi. He remained undefeated on 82 and Sultans won the match with 21 spare balls.

Before the match began, Multan Sultans chose to pitch first after winning the draw.

At one point the Sultans were ready to score a great total as the team was 71/0 at the end of the 8th over.

But two double wicket overs by Dahani crumbled Zalmi on 88/4. He was asked to pitch by his captain in the ninth over of the match.

In the one above the star he fired Kamran Akmal and Shoaib Mailk. And in the eleventh over, he removed Haider Ali and Rovman Powell to shift the momentum in his team’s favor.

The quick succession of wickets had brought two new batters David Miller and Sherfane Rutherford into the crease for Zalmi. Both had a hard time taking off as the Sultans bowlers didn’t give them room to attack.

The pressure at the end was too much and Miller started for 22 at Blessing Muzarabani’s bowling alley in the 16th over.

Later, Rutherford found some flow and hit a 56-ball 40 to get Zalmi over 150. He ran out a ball before innings were over as Peshawar finished the serve with 166-7.