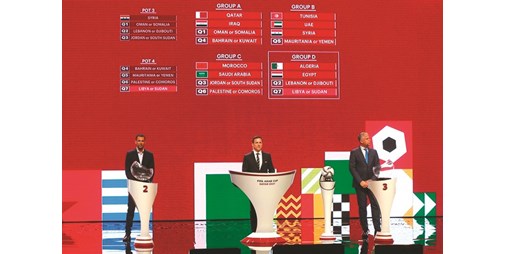 The Organizing Committee for the 2021 Arab Football Cup, which will be held in the Qatari capital (Doha) from November 30 to December 18, revealed that a public attendance of 30% of the capacity will be allowed in Khalifa International Stadium and Jassim bin Hamad Stadium in Al Sadd Club, which will host the matches. The preliminary qualifying matches for the group stage of the tournament, during the period from 19 to 25 June, where our national team “Blue” will meet with its brother Bahraini team 25 June, and the start of the preliminary matches will be on Saturday 19 June with the meeting of Libya and Sudan, the Sultanate of Oman with Somalia on 20 June, and Jordan with South Sudan on June 21, Mauritania with Yemen on June 22, Lebanon with Djibouti on June 23, and Palestine with Comoros on June 24.

The tournament will witness the participation of 23 teams (12 from Asia and 11 from Africa), competing in two stages, starting with the qualifiers and reaching the final stage.

Among the 23 teams, the qualifiers for the 14 lowest-ranked teams, according to the latest ranking of the teams issued by the International Federation of Football Associations “FIFA” last April, will play direct confrontations from one match to reserve a ticket to qualify for the finals of the tournament.