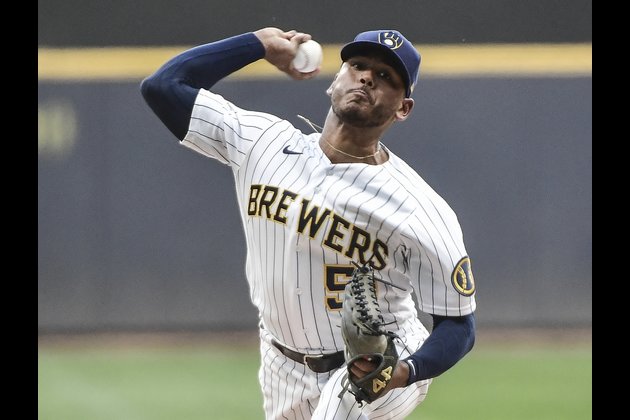 One of the hottest pitchers on one of the hottest teams in baseball will try to lead his team to another series victory in the rubber game of a three-game series when the Milwaukee Brewers take on the host Cincinnati Reds on Thursday afternoon.

In his last start, the Brewers’ Freddy Peralta (6-1,2.25 ERA) took a no-hitter into the eighth inning at home against Arizona on Friday before yielding a hit to Nick Ahmed with one out. The Brewers closed out a combined one-hitter in a 5-1 win on Peralta’s 25th birthday.

Peralta fell just an out short of qualifying for the win in a 9-4 victory over the Reds on May 23 in Cincinnati. Lifetime, Peralta is 2-1 with a 3.62 ERA in 11 appearances (five starts) against Cincinnati.

Peralta is part of staff that includes Brandon Woodruff and Corbin Burnes, a rotation that is quickly turning into one of the best in baseball.

“It’s coming with these guys,” said Brewers manager Craig Counsell. “We’ve flirted with this stuff a bunch of times, really. You’re hoping to have these nights. They’re good things.”

Even with the departure of Trevor Bauer to the Los Angeles Dodgers in free agency, the Cincinnati Reds thought they had that potential coming into the season with Luis Castillo, Sonny Gray and Tyler Mahle.

However, the struggles of Castillo and injuries to Gray have been the primary reason the Reds haven’t been able to consistently remain above .500 since early in the season.

Castillo (2-8, 6.63) enters Thursday after snapping a personal seven-game losing skid with a solid six-inning effort on Friday in St. Louis. The right-hander, who was 0-6 with an 8.04 ERA in a brutal May, allowed just three hits and one run in his first start of June, a 6-4 win over the Cardinals.

Castillo was tagged for five hits and five runs over five innings and took the loss in a 9-4 defeat to Peralta and the Brewers on May 23. Castillo is 4-6 with a 3.86 ERA in 12 career starts against Milwaukee.

The Reds, who had their bullpen exposed again in a 5-1 loss Tuesday when Gray left after just three innings with a strained right groin, got a big boost from rookie right-hander Vladimir Gutierrez on Wednesday. Gutierrez went seven strong innings in Cincinnati’s 7-3 win.

“(Gutierrez) definitely helped our bullpen, and we were able to finish it off,” Reds manager David Bell said. “He was pitching like a very mature pitcher. It was a joy to watch.”

The Reds were able to do something Wednesday night that they’ve been able to frequently accomplish over a good stretch of baseball that has seen them win five of six and seven of nine. The Reds scored twice in the first, three in the second and two more in the fourth to race out to a 7-1 lead.

“It’s always nice,” Bell added. “You feel like you have to keep adding on. It does influence the decisions you make.”

The Brewers are likely to be without third baseman Travis Shaw indefinitely after he dislocated his left shoulder diving for a ground ball in the second inning. He appeared in great pain on the ground for several minutes before trainers were able to get him to his feet and escort him off the field.