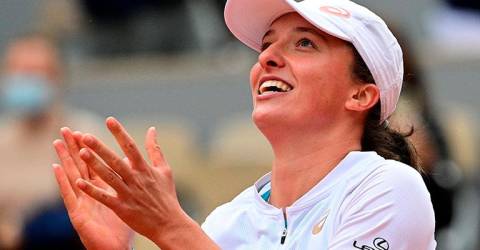 PARIS: From her French Open title to her run to the quarterfinals here on Wednesday, Iga Swiatek (pix) has had an eventful eight months and it’s now time for the 20-year-old to chill.

The Pole, who burst into the limelight when she lifted the Suzanne Lenglen Cup as a teenager without dropping a set last October, is feeling the strain of playing professional tennis.

She was knocked out in the last eight by Greek Maria Sakkari, 6-4 6-4, after being unable to adjust her tactics while also suffering a thigh problem.

“When I was on court, I felt it totally differently. As I said, I couldn’t even sleep well yesterday. I slept like few hours,” said Swiatek, seeded eighth at Roland Garros.

“I think I was feeling everything twice as much as I should. It was hard to rationally just see what’s going on.”

Her next big goal will be the Olympics in Tokyo, and she does not have many hopes for the grasscourt season, which culminates at Wimbledon from June 28-July 11.

“I don’t know if I even remember how to play on grass, so we’re going to see how that’s going to go. I’m not putting, like, any expectations or any pressure on myself because I really just want to learn how to play on it,” she said

“For sure we’re going to prepare more for Olympics, and my next peak is probably going to be the Olympics.”

Until Tokyo, Swiatek said she was not going to consider tennis as a job so that the pressure does not weigh too much on her.

Mental health has been at the center of debates in tennis since Japan’s Naomi Osaka withdrew from the French Open after the first round, revealing she had been suffering from depression for almost three years.

“I had a pretty intense season. I played many of the tournaments, more than in my previous seasons. I’m happy with the results that I have, but also I’m constantly at work,” Swiatek explained.

“For sure we’re going to try to chill down, chill out a little bit, cool down, also find some perspective. Basically when I close my eyes, I only see tennis courts and balls, so it’s pretty tiring.”