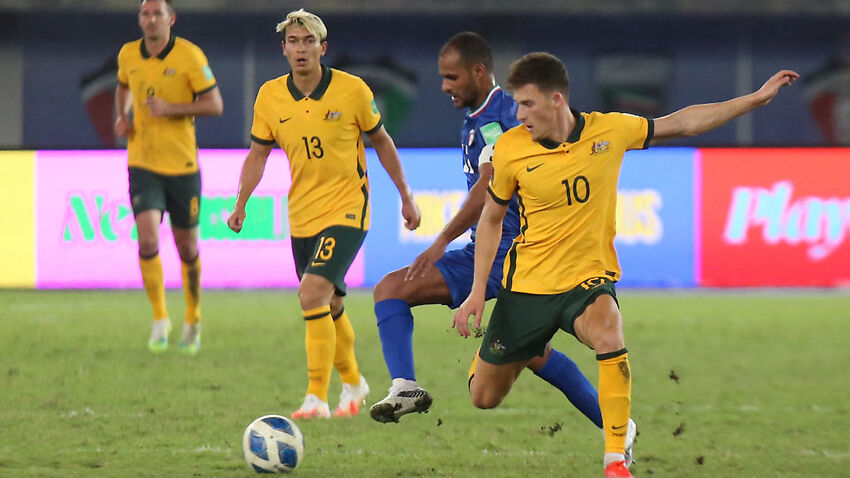 The Australians earned a 3-0 victory that puts them in pole position to win the group with maximum points.

After five matches the Socceroos have a five-point lead over Kuwait and Jordan, with matches against Chinese Taipei, Nepal and the Jordanians to come.

Arnold’s men were streets ahead of their opponents and none shone more brightly than Hrustic, who plays his club football for Eintracht Frankfurt in the Bundesliga.

The Dandenong-born playmaker looked comfortable and assertive, was precise with his promptings, earned an albeit generous penalty and generally kept things ticking along nicely.

He capped a memorable evening by scoring a lovely goal from a direct free kick that had class written all over it.

At 24, he played with the poise of a veteran and you could be forgiven for forgetting that this was only his fourth international and his first as a starter.

It was an eye-opening 82-minute performance that augured well for his and the team’s future.

So where is the problem for Arnold?

Well, the coach eventually will have to make a decision that could have serious ramifications in terms of the Socceroos’ chances of reaching the promised land in Qatar next year.

With China-based Aaron Mooy expected to be available in the next phase of qualifying, the coach will have to determine which of the two offers more to the team.

Will it be Hrustic’s controlled exuberance and flair or Mooy’s greater experience and cleverness?

And if Arnold opts to play boths who would be the one to miss out?

Will the coach be forced to tweak his system, maybe at the expense of a holding?

Some will point out that Hrustic is still a relative newcomer and needs more runs on the board to be fully entitled to a starting spot. Which is fair enough.

However even Blind Freddy could tell that the lad has talent. You just don’t play for any team in Germany’s top tier if you do not have talent and the right temperament.

So it would appear that the issue might not be whether Arnold can afford to have a ‘rookie’ occupy such a vital role but whether he can afford not to.

The coach has made it a point not to mention the H-word in the lead-up to the hub in Kuwait City because he does not want his players to be conditioned by the heat factor.

Hrustic however has inadvertently turned up the heat on his coach with his ‘watch me go now’ display.