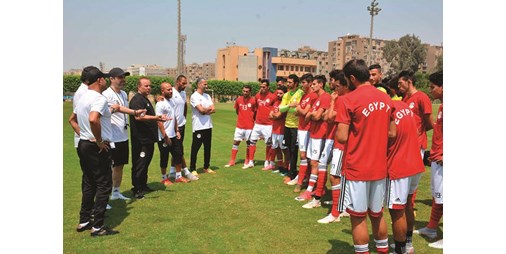 After a long absence, the Egyptian Olympic team, led by Shawky Gharib, returns today to face its South African counterpart, nicknamed “The Boys”, in the first meeting between the two teams, at nine in the evening, Kuwait time, at the Suez Stadium, and the two teams meet again after 3 days in Cairo Stadium, as part of the two teams’ preparations for the Tokyo Olympics.

From the camp of the Egyptian team in Ain Sukhna, the striker of the Turkish team and Galatasaray, Mustafa Mohamed, expressed his happiness at the participation of the Egyptian team in the activities of the Tokyo Olympic Games, stressing that all the players have the heart of one man, and are striving to do their best to achieve a new achievement in the Olympics.

He added that Egypt’s group in the Olympics is very strong, as it includes Argentina, Spain and Australia, but the team’s players have determination and determination, which makes them able to achieve distinguished results.

The Pharaohs will start their matches in Tokyo against Spain on July 22, then Argentina on July 25, and conclude the first round against Australia on the 28th of the same month.